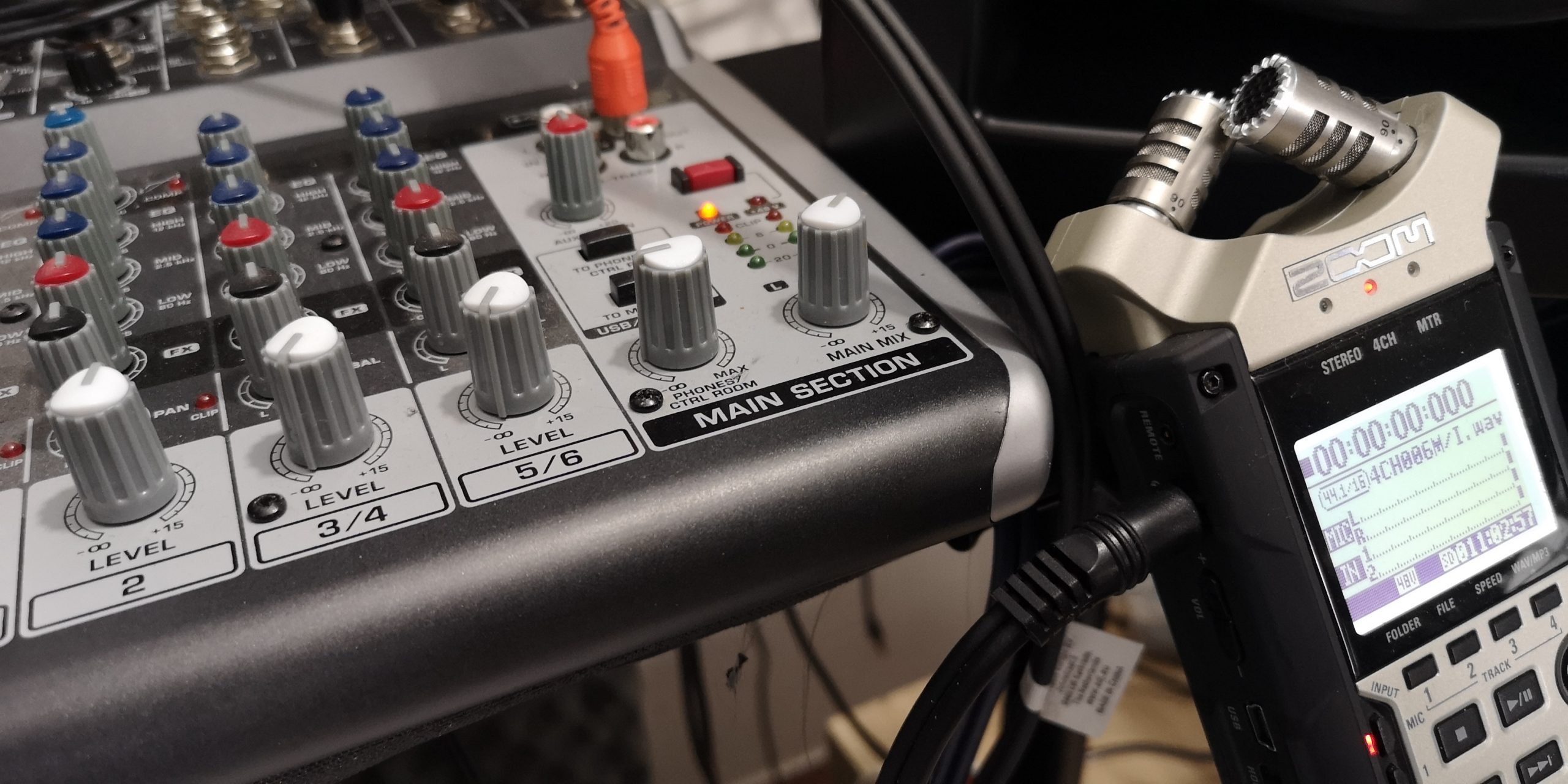 What is the latency in audio recording?

The latency problem with digital audio recording is that it can take several milliseconds for the audio to be delivered to the monitor, because the monitor is not a discrete device.

Latency may also occur when recording audio – during analog-to-digital conversion – in both computer PC software or hardware devices like audio recorders, looper and audio interfaces.

In this article, we will discuss both types of latency – with DAC and ADC – causes and how to deal with it in your studio.

The latency problem affects everyone – no matter if you have a professional studio – or you are a hobbyist in sound.

The longer your audio chain will be and more conversion (analog to digital or vice versa could be done) the lantency will become bigger problem.

A slight delay before audio is transferred will increase in every step of you processing, because the monitors are moving around inside of the system.

That delay is called the latency in audio or video.

In order to make things more efficient, audio is recorded at a lower sample rate to minimize the delay when recording. In order to do so, a video capture application (e.g. MPEG-1 to AVC) uses an adaptive sampling rate to capture audio, then interpolates that audio using the latency in audio recording.

This can improve audio performance, especially for high frame rates with large, loud monitors. To minimize this delay, the MPEG-1 to AVC process uses the adaptive sampling rate. This process allows the video file itself to be recorded at a slightly wider sample rate to ensure the audio file gets processed correctly

How to avoid latency in audio?

Latency could be a serious problem in recording in real-time and synchronization. For example when drums section is delayed with guitar you may have a experience that band is playing out of tempo but this is only the result of delay of digital buffer in the audio device.

In digital recording devices all acoustic wave (sine signal with harmonics) is digitized and sampled with some sample rate and bit-rate (size of the sample). This process is called sampling and quantitating.

This is just one technique. The best technique is using the same buffer size with a small buffer size.
The best sample rates and time windows you can use is based on your budget.

For example if you can use a small buffer size for a recording and use a lot of samples at a high sample rate, this is very helpful in reducing latency and the amount of processing time for your audio. But if you use a lot of high sample rate and very little samples it will take longer to achieve the sound quality.

For example a low sample rate that is used a lot for a good track and a high sample rate used a little a lot for a bad track. This leads to some loss of bass and high pitched note.
This can also cause some harsh clipping. It could cause a loss of balance.

If this technique does not result in that, try to make the recording more interesting by adding more instruments or adding sound to the track.
This could cause a bit of distortion.

Another way that you can reduce latency is to mix your sample rate and sample size together. This is a good way to improve the quality of your output and also to reduce your processing cost and CPU.

A lot of people use a very narrow sample rate, and then make it big by making more than two channels of samples. It is usually very difficult to get a low level of bass to this low channel level.

It is always better to use two channels or two different sampling frequency.
This is a great technique if you have only some budget and time to work, and you have a lot of time for editing, mixing and mastering.

If you are using a very narrow sample rate it is better to use a sample frequency that is between 40 to 80 kHz. And this sample rate will give you a bit less and bit less, but the result will always be more balanced (and more accurate).

I use a 16 bit on 4 channel with sample rate about 96 KHz. It gives me a lot of stability in my audio and can be very easy to edit and mix.

A very narrow sample rate is a very common technique I hear. It also makes it easy to do the recording and to mix it on the same day with very little processing power.

However there are several things that you can do to decrease latency. Full elimination of latency is not possible because even the most expensive device (most powerful CPU) always need to use a buffer to make a mix or attach a effect like distortion, chorus, delay, vocoder.

What is acceptable latency for audio recording?

Latency below 30 milliseconds is acceptable and almost not possible to notice by the listener.

In this article I will show you some solutions to decrease the latency in you audio system.

The first step that you can do is to decrease the buffer size of the recording/mixing device.

Low latency audio devices – how to find them

To find out which devices will have lower latency, it is necessary to find out the cause of this phenomenon.

In processing audio with digital devices, there is a process called analog-to-digital conversion.

Digital devices can operate only on a stream of bits, i.e. zeros and ones, while analogue sound is an electrical signal – a continuous function with many harmonics.

To convert an analog signal to a digital form, we need a device called Analog Digital Converter (ADC)

Only the sound converted to digital form can be processed, e.g. added effects, filters, editing or other processes carried out by the digital sound processor (DSP)

As already mentioned, the sound is a continuous function in time and the digital form requires conversion to a discrete form – that is, divided into very small fragments in time – called samples.

For example, a CD format has a sampling frequency of 44.1 KHz – that is, every second the ADC collects and stores over 44,000 samples (values)

Modern HD audio devices can sample even at 96 or 192 KHz which is pretty demanding operations that require fast CPU.

The sample values are assigned to the values according to the adopted sampling size, e.g. 32 bit or 16 bit.
More bits means more discriminated values but also more data to be processed.

It is physically impossible to try in real time – it is always necessary to use a so-called sample buffer – that is, space in the memory of a computer or digital device that the sound processes.

The slower the device is, the longer this buffer length must be. When the sampling buffer is too small – our sound will be distorted – because the processor will skip some samples (lose them)

In turn, a long buffer creates a delay (latency) between where the sound actually appears at the input – and when it is processed.

The main cause of latency is therefore too much buffer caused by too weak hardware – and more precisely, too little processing power of the processor.

So far, we have already discussed the causes of the delay in the analog-to-digital conversion that usually occurs when recording audio or applying effects such as reverb, reverb in real time.

However, the latency problem also applies to the reverse process of digital audio playback.

Files on our computer or other device like WAV, MP3, MP4, WMV, MOV are binary strings (0 and 1) saved in some format called a audio codec.

In order to reproduce the sound stored in such files, we have to convert them back to analog form. Only then will we be able to send to our studio monitor, loudspeaker or headphones.

The sequence of electrical impulses is already an analog sound which causes vibrations in the speaker diaphragm and creates an actual wave of different frequencies. Only this form is able to hear our ear.

The DAC conversion process is also computationally demanding and relies on a sample buffer.

For this reason, we should look for devices with high computing power – unfortunately, it is associated with a higher price.

Regardless of whether we are dealing with sound recording or playback – wherever there is conversion to digit sound – we will struggle with the problem of latency.

When designing our audio system – we should eliminate the amount of performed conversions and choose devices that have high computing power.

Often when comparing two devices, it may seem to be the same, because they have the same recording formats, types of inputs and functions.

Unfortunately, often cheaper devices may have weaker components affecting the device’s performance. Such elements are the processor, frame memory, and durable media. The weaker the device, the more the latency problem will increase.

So let’s test the devices and check how they work in practice.
If you are considering purchasing:

then remember that in all such devices we deal with analog to digital conversion for recording and digital to analog conversion for playback so they will be affected by audio latency.

If you consider buying your first digital piano or MIDI keyboard or digital workstation you can check this article about differences between several electronic keyboard instruments.

Now if you know everything about latency in audio – you can check our products:

Latency is not only the problem with audio. It also can be serious problem with recording audio and video at the same time. Video streams encoding could be much more power-consuming than audio.

If you can not find the codec codec file in the above video, try adding a copy of it to your computer and copy over it.

The last thing you should be doing is to open your codec file.
Finally, you have to copy it and paste it into your video player.